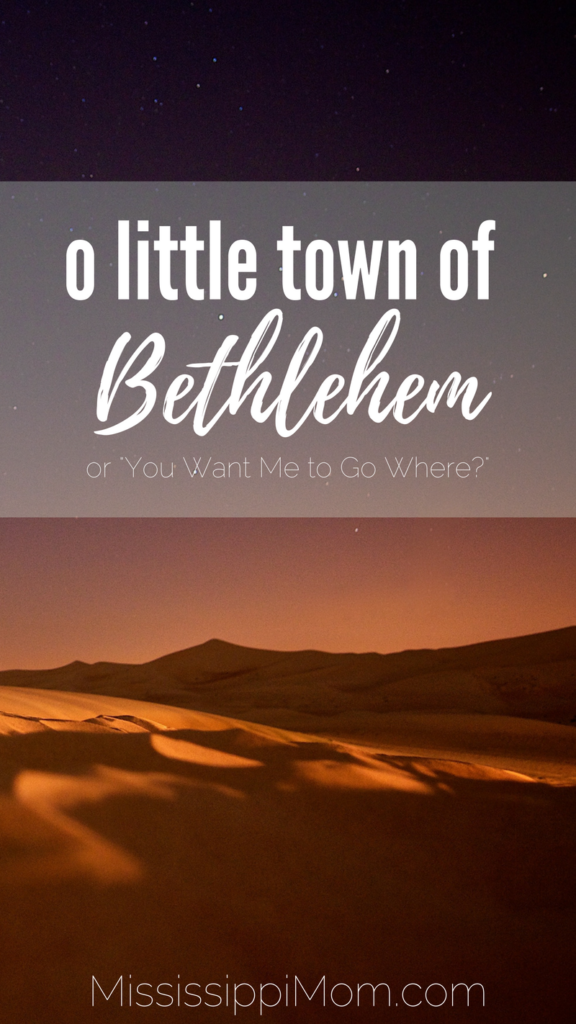 “But you, Bethlehem Ephrathah, though you are small among the clans of Judah, out of you will come for me one who will be ruler over Israel, whose origins are from of old, from ancient times.” Micah 5:2

Read Luke 2:1-7.  Can you imagine being Mary?  Can’t you just hear her saying, “You want me to go where?”  That must have been some journey.  Put yourself in Joseph’s shoes for a moment and imagine hurrying from door to door, looking for a place to stay, while your wife’s face grows paler and her pains increase.  Finally, they settle in for the evening, nestled near animals that probably got no sleep.

Why go to Bethlehem at that time?  Why make that trip?  Because Caesar said so?  No. Because God did.  You see, He had promised He would raise up a ruler, born in Bethlehem, to govern over Israel forever.  Caesar’s census was just God’s way of bringing His plans to be.

Why, then, you might wonder, was there no room for Him?  If God had planned His appearing, certainly He could have planned a place for Him as well.  Oh but He did!  You see, though He was a king, He did not come to dwell in palaces. Though He would rule forever, He first came to serve.  Because He was sinless, He became a sacrifice.  Though a manger may be unfit for a king, it’s perfect for a lamb.

Worship:  Sing “O Little Town of Bethlehem” and “Away in a Manger.”  Try to imagine the scene.  Express to God your wonder at His plan and praise Him for it.  Remember that God is the same yesterday, today and tomorrow, and He still refuses to force men to make room for Him.  He knocks, but we must open the door.  Open your heart to Him.  Let Him come in and dwell with you.    Enjoy His presence right now.

Family Focus: Put yourself in the story.  As a family, act out the scenes in today’s text.  (You can begin earlier as well, including the angel’s visit, as well as Elizabeth and Zechariah.)  Assign parts and put on a play.  Enjoy using your imagination to bring Bethlehem a bit closer.  (You could also do this as a puppet show or use a nativity scene.)  Be sure children understand that they must make room for Christ in their lives.  Give them the opportunity to invite Him into their hearts if they feel the need for Him.