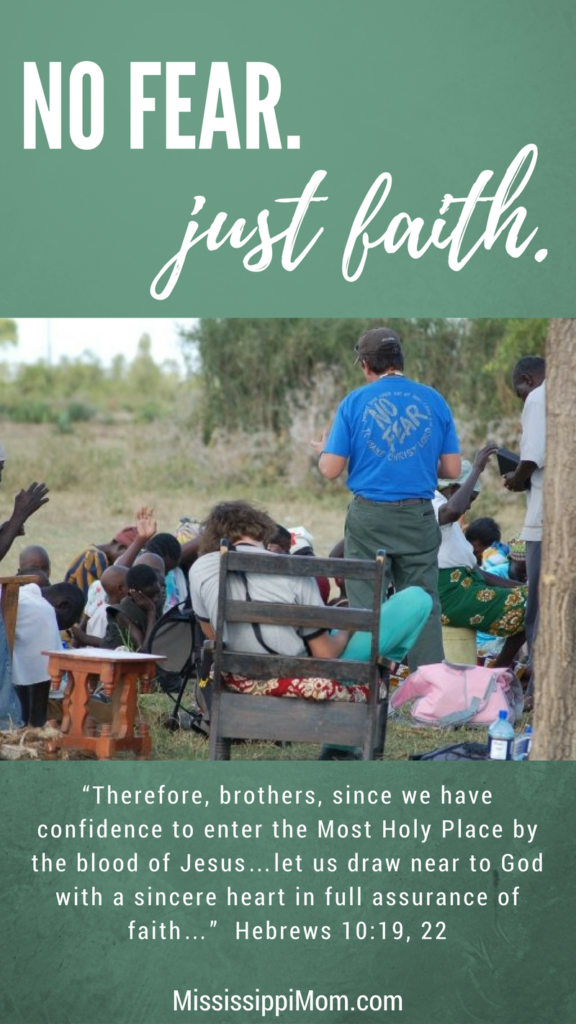 “Therefore, brothers, since we have confidence to enter the Most Holy Place by the blood of Jesus…let us draw near to God with a sincere heart in full assurance of faith…”

First, read Luke1:5-25; 57-80.  It’s a longer passage than usual, but you won’t want to miss the beautiful story that sets the backdrop for today’s study.  Don’t fail to find some humor in it either.  Imagine, if you can, the scene as Zechariah tried to explain to everyone, through gestures, what he had just witnessed.  Notice the fact that when the angel spoke to him, Zechariah questioned him and spent the next nine months regretting it.  Remember that Mary questioned the angel, too, but while she asked, “How can this be,” Zechariah asked, “How can I be sure of this?”  Very different questions with very different answers.  Mary’s question implied that, while she wondered how it was possible, she believed it was true.  Zechariah’s showed his lack of faith. He asked for a sign, and boy did he get one.

For months he sat silently, watching the promises of God come to be.  It’s easy to imagine he had much time to reflect and remember all the things the angel had said.  He must have mused over them at length, wondering what it would be like to have a child who “was filled with the Holy Spirit even from birth.”  As he watched other tantrum-throwing toddlers, his eyes probably twinkled as he looked forward to two’s that were more terrific than terrible.  There was so much he would have liked to say, and on the day of John’s birth, he got the opportunity.

You see, his neighbors and relatives weren’t much different from ours.  Maybe it’s because they lived in the south, of Israel that is.  When Elizabeth gave him the name “John,” they were astonished and insisted the boy’s father make the decision. There had never been a “John” in their family, and they weren’t expecting one.  When Zechariah wrote, “His name is John,” his ability to speak returned.  His act of obedience opened his mouth, and he spoke.  Or, rather, God spoke through him, for he spoke of things he could not have known.  His faith, which had faltered, was finally firm.

Worship:  Read Zechariah’s song (Luke 1:68-79) aloud. Remember that Zechariah was a priest of God, a man set aside to serve the Lord.  On the day he was told of the coming birth of his son, he had been chosen to enter the Most Holy Place to minister before the Lord.  No one did this without trepidation, and it was only done once a year.  If the priest were not prepared properly, he could be struck dead.  Needless to say, Zechariah understood fear of the Lord.  Perhaps that’s why he praised God for the fact that He enables us “to serve Him without fear in holiness and righteousness before Him all of our days.”  It is God who enables us to serve Him, and it is Christ who makes the way.  Hebrews 4:16 says, “Let us then approach the throne of grace with confidence so that we may receive mercy and may find grace to help us in our time of need.”  Is this a time of need for you?  Would some mercy make a difference in your life today?  Approach the throne of grace right now, knowing God wants meet you there so much He sent His son to die for you.

Family Focus: Look at a drawing of the temple or tabernacle.  (Often, you can find one in a study Bible, but a simple Internet search will also produce plenty of pictures.)  Explain that the Most Holy Place was the very place God chose to dwell.  Only the high priest could enter that place to offer sacrifices for the people’s sins, going before the Lord for them.  Explain that a great veil separated the Holy Place from the outer courts, keeping everyone but the high priest out.  Then explain that Jesus sacrificed Himself for us and then entered into the holy place of heaven, where He intercedes for us.  When He died, the great veil in the temple was torn, and we were no longer forbidden to enter in.  Further, explain that when we choose to follow Christ, His spirit comes and dwells within us, making our bodies the very temple of the Lord.  In the past, He chose to dwell in the temple; now He chooses to dwell in us.