You are here: Home / Daily Christmas Devotions / Day Thirteen: “While Shepherds Watched Their Flocks by Night” 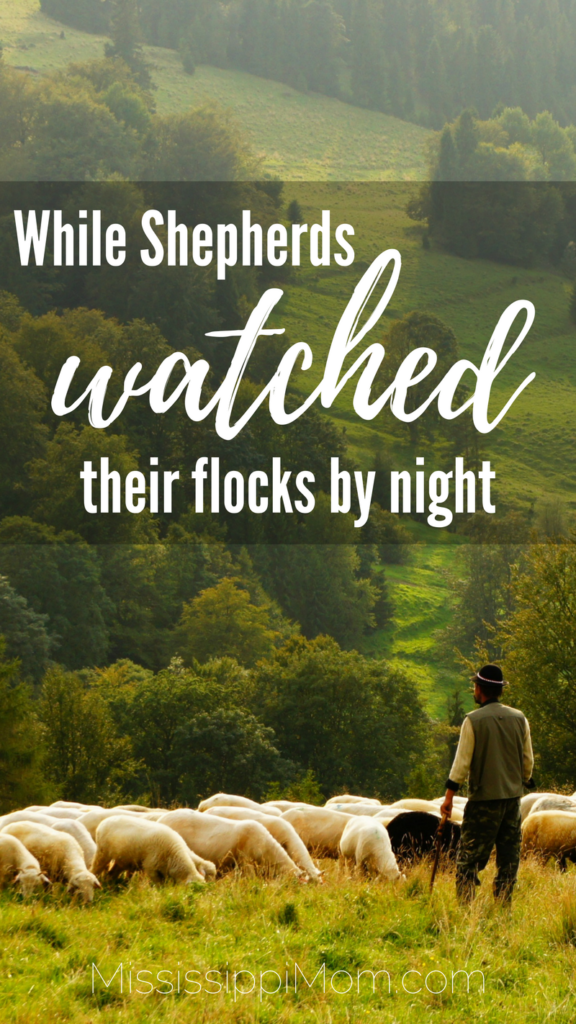 “He tends his flock like a shepherd:  He gathers the lambs in His arms and carries them close to His heart…” Isaiah 40:11

Stop and read Luke 2:8-18.  Take a moment and really think about it.  Jesus had just been born, but the only people who knew were His parents and the farm animals.  The king had come, and no one had been ready to receive Him.  It certainly seems He should have had some sort of welcoming party, doesn’t it?  God must have thought so, too, for He announced the birth of His son to shepherds who were watching nearby.  God’s word tells us that the shepherds were terrified by the appearance of the angel and that the people of Bethlehem were amazed by the tales they later told.  You can easily imagine why.  Of all the things people expected that morning, shepherds singing praises and announcing the coming of the Messiah was probably not high on the list.

So, why did God choose the shepherds?  Of all the people the angel could have appeared to that night, why them?  First, it may simply have been the fact they were awake.  They were watching.  They never dreamed what they would see, but they had kept their eyes open.  More so, they were watching nearby.  It’s easy to imagine that a celebration unseen by human eyes was happening all around them, angels celebrating the birth of Christ.  For just a moment, God must have longed to see humans celebrate as well.  So, the angels popped into the shepherds’ perception and invited them to praise.

What response could the shepherds have other than “Let’s go see this thing!” After seeing Him, they had no choice but to share Him.  They spread the word as they went.  It’s enough to make you wonder what happened to the sheep.

Worship:  Another possible reason the angel appeared to the shepherds in the fields is because the Good Shepherd had just been born.  Perhaps God saw them watching over their flocks and wanted them to see the one who watched over them.  Maybe He wanted to show them just how far He would go to see that not one lamb was lost.  Read John 10:14-18.  Praise Jesus that He sought us out when we were lost and laid down his life for us.  Pray, asking Him to find your lost friends and family members today, and like the shepherds, spread the word on your way.

Family Focus: Sing together “The First the Noel” and “It Came Upon a Midnight Clear.”  Explain about sheep, which need guidance and protection.  Tell of how shepherds watch through the night to keep wild animals and thieves away from their flocks.  Explain that Jesus is our Good Shepherd, who seeks us when we are lost and carries us to safety.