You are here: Home / Contests & Giveaways / Fun for Everyone at Family Gras

My older sister was born in New Orleans in the smack-dab middle of Mardi Gras.  Mom watched parades out of the hotel window.  I wasn’t born there (they moved back to Mississippi right before she gave birth to me), but I’ve always felt a bit of a connection to that part of Louisiana, having heard stories of my parents’ time there.  And, well, it’s a great place to visit, isn’t it?

Of course, Mardi Gras isn’t always something I think of when I plan family outings.  That’s why I was excited to learn about Family Gras.  What?  You haven’t heard of it either?  Well, just wait because I’m gonna tell you what it is, when it’s happening, and how you can win 4 Royal VIP passes to this year’s event! 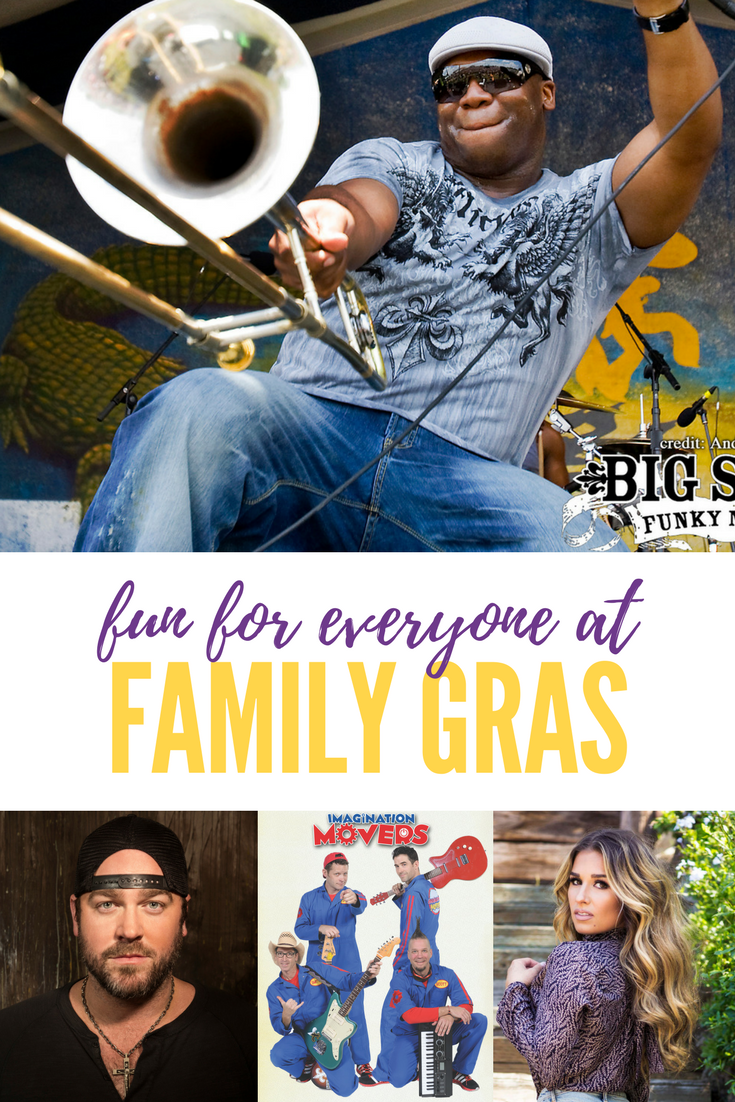 Family Gras started back in 2007 when, in the aftermath of Hurricane Katrina, the Jefferson Parish Convention and Visitors’ Bureau was looking for a way to revive Carnival and boost tourism and hotel bookings.  They decided to bring in national music headliners and dedicate the first weekend of Mardi Gras to an event for everyone with free concerts and entertainment.

What is Family Gras?

According the website of the Jefferson Parish Convention and Visitors Bureau, “Family Gras is the perfect getaway for family. A FREE event, Family Gras traditionally takes place on the neutral ground (median) of Veterans Memorial Boulevard across from Lakeside Shopping Center in Metairie, Louisiana. An ideal location to see the pageantry of Mardi Gras and enjoy the outdoor concerts by national & local artists on the Mardi Gras Plaza stage.  Shop the Art Market filled with a variety of items from Louisiana photography, framed artwork, regional decor, folkart, hair accessories, to hand-crafted jewelry.  The kids court is filled with activities for kids 12 and younger.  Face painting, unique hand-wax art, and interactive games.” 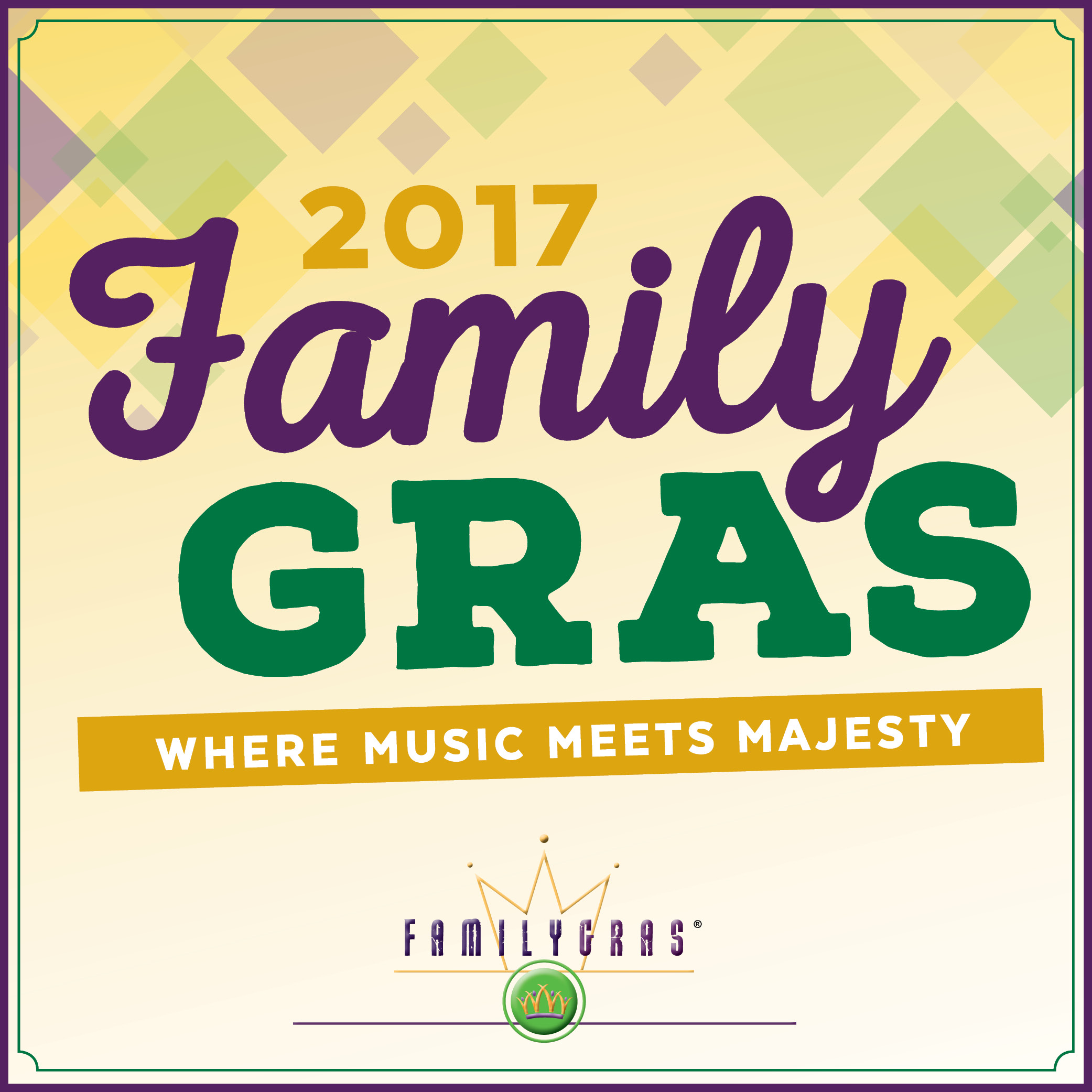 Fifth Harmony, an American girl group comprised of Ally Brooke, Normani Kordei, Dinah Jane, and Lauren Jauregui, achieved rapid success. In their short five-year history, the group has won some of the industry’s biggest honors including an American Music Award, a People’s Choice Award, an iHeartRadio Music Award, seven Teen Choice Awards and three MTV Video Music Awards. One of the members of Fifth Harmony, Normani Kordei, grew up in New Orleans, Louisiana before being forced by Hurricane Katrina to move to Texas in 2005. Said event producer Greg Buisson, “This is Fifth Harmony’s first New Orleans-area concert ever. Their loyal army of Harmonizers will electrify Family Gras. We are excited to host them this carnival.” 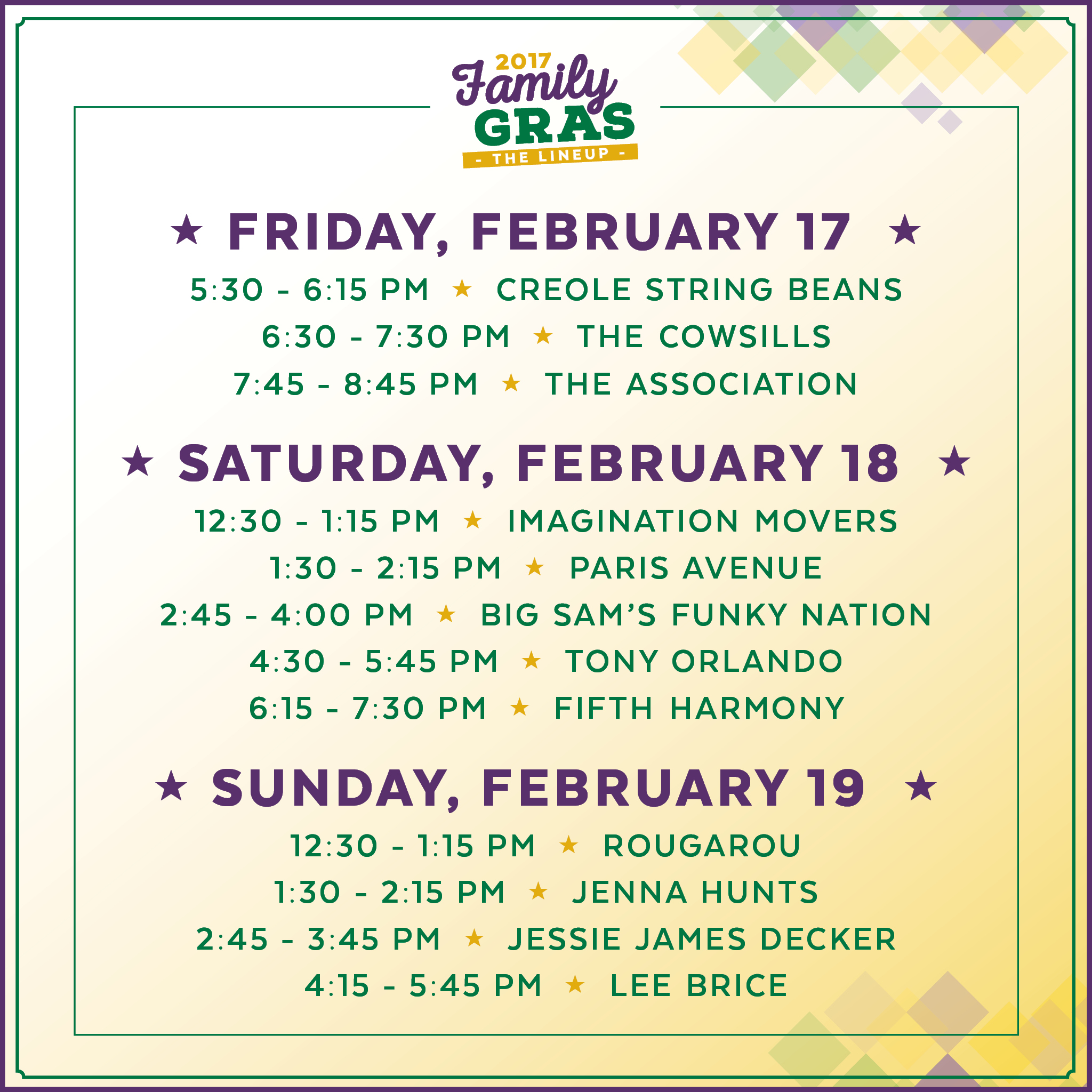 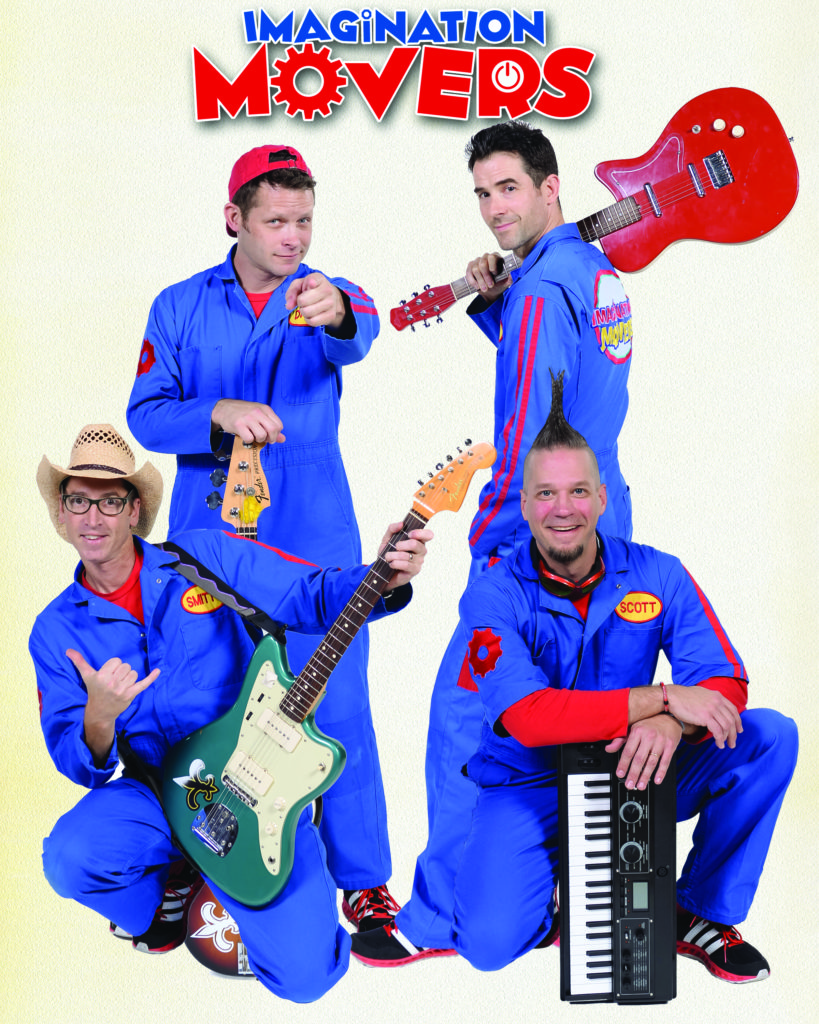 The 10th edition of Family Gras will begin at 5:30 PM on Friday, February 17th and end on Sunday, February 19th.  According to Violet Peters, CEO of the Jefferson Convention & Visitors Bureau, “We are expecting one of our largest crowds to date. Our talent lineup is always unique and varied. From Fifth Harmony, a group that has achieved so much in just a few short years, to classic hitmakers like The Cowsills, The Association and Tony Orlando, to country favorites Jessie James Decker and Lee Brice, plus our Louisiana sounds, Family Gras has a very diverse and devoted fan base that appeals to any age.”

Family Gras is a three-day festival of carnival, cuisine and concerts that is free to the public. Family Gras has revolutionized the first weekend of carnival in Metairie and helped brand the Jefferson carnival experience as a family event. The festival, produced by the tourism bureau, has attracted as many as 100,000 festival goers over its three-day weekend with an economic impact of more than $6.8 million.  The event is presented in part by First NBC.

The Association is an American pop band from California in the folk rock or soft rock genre. During the 1960s, they had numerous hits at or near the top of the Billboard charts including “Windy“, “Cherish“, “Never My Love” and “Along Comes Mary“.

The Cowsills enjoyed great success during the late 60′s and in to the very early 70′s. As a family band they became the inspiration for the television hit series The Partridge Family. They are known for: “Hair”, “The Rain, The Park & Other Things”, and “Indian Lake”.

Fifth Harmony is an American girl group formed on the second season of The X Factor US in July 2012. Their hits include “BO$$“, “Sledgehammer“, “Worth It“, “All In My Head (Flex)”, “That’s My Girl”, and the triple platinum single “Work from Home“. Fifth Harmony’s fan base is known as Harmonizers. They led the group to achieve 7 million U.S. digital downloads and over 1.6 billion U.S. on-demand streams. Fifth Harmony has sold almost a half-million albums in the U.S.  The girls as a group have amassed 3.7 million Twitter followers, 7.6 million Facebook likes and over 8 million followers on Instagram.

Imagination Movers are a high energy, interactive music group for children comprised of four friends from New Orleans who partnered with Disney Channel. The Movers filmed 75 episodes of their Emmy Award- winning series over three seasons. The group has sold half a million CDs and DVDs to date.

Jessie James Decker signed her first record deal with L.A. Reid where she released her debut album in 2009. Jessie and her husband, NFL wide receiver Eric Decker, documented their life on the hit E! reality show Eric and Jessie: Game On. Her hit songs include: “I Look So Good”, “Comin’ Home”, “Clint Eastwood” and “Lights Down Low”.

Lee Brice is an American country music singer and songwriter with four number 1 singles on Billboard.  His hits include: “A Woman Like You“, “Hard to Love“, “I Drive Your Truck“, and “I Don’t Dance“. He has also charted within the top 10 with “Love Like Crazy“, “Parking Lot Party“, “Drinking Class“, and “That Don’t Sound Like You.” “Love Like Crazy” was the top country song of 2010 according to Billboard Year-End, and broke a 62-year-old record for the longest run on the country chart.

Tony Orlando is a Grammy-nominated singer who celebrates over five decades as a beloved entertainer. Tony is an iconic entertainer who has truly done it all: top selling recording artist, songwriter, concert headliner, network television star, Motion Picture actor, Broadway performer and author. Orlando’s theme song, “Tie A Yellow Ribbon,” “Candida”, and “Knock Three Times”. Tony is a music legend who hosted a variety program, “The Tony Orlando and Dawn Show” on CBS from 1974–76.

Enter to win 4 VIP Royal Passes to Family Gras 2017 – a $625 value!  These passes will give you an “up close and personal” experience, and you can learn more about the passes here!

*This is a sponsored post, which means I was compensated in some way for publishing it.  The prize is provided by the sponsor.