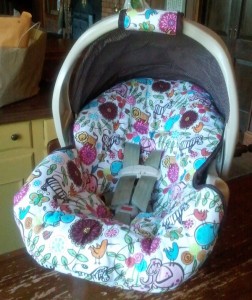 When we found out were having twins (or, rather, when the fact actually sank in), we took stock of the baby items we still had on hand.  One thing we already had in duplicate was a mismatched pair of infant carseats/carriers.  And, when I say “mismatched,” I mean in the way a baby girl’s carrier and a baby boy’s are usually on fairly opposite ends of the color spectrum.  That and the fact that things do get dingy over time made it very clear we’d either have to get new seats or get new covers. So…

I began the search for infant carrier covers, and do you know what I found?  There are some absolutely adorable ones out there!  Truly.  Just take a look on Etsy if you don’t believe me.  I also found that they were not cheap.  Not at all.  And, while I might be picky about matching carseats, I’m not willing to pay as much for new covers as for a new carrier so I began the search for a good tutorial on how to make them myself.

And, I found it!  Y’all, the link I’m sharing here will take you a fantastic tutorial on how to take your existing cover and create a new one that fits perfectly.  Ashley of makeit-loveit.com has some amazing tutorials, and this is one of them!  Follow it, and I’m sure you’ll have perfect covers for your carseats!

That said, I should tell you that I’ve never been much of a follower.  And, I was on modified bedrest when I decided to do this, so….

I took the idea, the most important parts of the tutorial, and I just went from there.  The result?  Not-so-perfect, but cute-and-functional covers!  I did a few things the lazy way, and if you look close, you can tell.  But, don’t worry, I’m not letting you get that close to my newborns in Walmart anyway so you’re much more likely to give me the complimentary responses I’ve gotten from almost everyone who’s seen them and not point out that I really need to learn to sew on bias tape a little better.

Here’s what I’ll do:  If you promise to read Ashley’s tutorial in its entirety, I’ll explain the shortcuts I took to make this project a bit more manageable for me.  Deal?  Good.

First, I did as the tutorial suggested and removed the bias tape and separated the main pieces of the cover from each other.  LOTS and LOTS of seam ripping.  If you don’t have a seam ripper, run to the store and buy two because if you’re anything like me, you’ll probably break one.  I’m just saying.

Then, I ironed the pieces very well (and flat!) and used them to cut pattern pieces of the fabric I was using.  (See, I made it all the way through step one before just winging it.)  I decided (after all of the initial seam ripping) to just cover the backside of the cover and leave the original fabric underneath.  Lazy way number one.  If you look closely at this photo, you can see the original fabric peeking through from underneath.  Oh well. 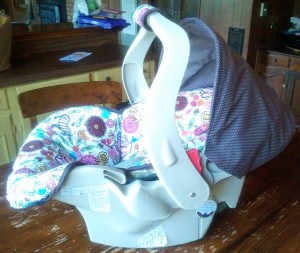 Then I sewed the fabric to the underside (new topside) of each section.  I sewed button holes over the holes for the straps and then attached the small pieces to the top and bottom and added the bias tape.  (The best way to do this is to take notes…and maybe photos…of how things were originally put together.)  Then I put the pieces together.  This is tough sewing so go slowly and be prepared to break a needle or two.

For the canopy, I would suggest you follow the tutorial.  I was thirty-something weeks pregnant with twins, and just reading the instructions for it made me tired so I just pretty much wrapped a new fabric around the existing canopy and stitched it down in a few key places.  Not my best work, but it will suffice.  You’ll obviously get better results if you do it the right way, not the lazy way.

Overall, the seats turned out well, and I really have had a lot of people comment on them…nicely! 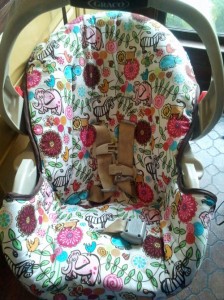 Do keep in mind (yes, this is a DISCLAIMER) that altering your carseat could void your seat’s warranty, and neither MississippiMom.com nor I  am responsible for your decision to do so or for your choice of fabrics.  Do remember that  flame resistant fabrics can be used in event of fire, so choose fabrics accordingly.