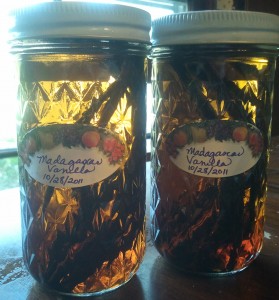 This post is a long-time in coming.  Seriously.  I’ve been wanting to make vanilla extract for a year at least.  I just haven’t done it.  Until now.  It took a good friend’s deciding to do it to make this happen.  It’s not difficult, and here’s how:

You’ll need vanilla beans and vodka.  We used Madagascar Vanilla Beans.  The ratio we used was seven beans to two cups of vodka.  Take each vanilla bean and split it lengthwise.  Put the split beans into the vodka (or pour the vodka over the beans).  Seal and let stand for at least six weeks.  According to my friend’s research, you can reuse the beans once or twice to make more extract, but (obviously) we haven’t tried that yet.