You are here: Home / Family Fun / Tangled…the movie was better than the cake.

In anticipation of Disney’s new movie Tangled, my daughter decided to have a Rapunzel birthday party.  We sent invitations, we planned party games, we made favor bags…everything was ready except for the cake.  Things got crazy that week, and I found myself on Friday wondering how on earth I was going to get a cake made by Saturday morning.  And then everything went wrong.  The buttercream wasn’t thick enough so the cake started sliding.  I couldn’t find my leveler so the sliding layer was sitting atop a lopsided layer, which is nothing if not a recipe for disaster.  I finished the cake up around 1:30 in the morning and went to bed praying that it would still be standing in the morning, and…. 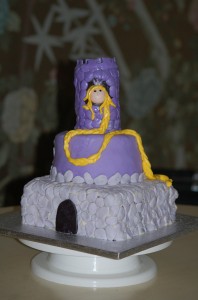 it was! Nothing short of a miracle, I tell you.  All I could see when I looked at it was flaws, but my little princess loved it so all was well.  Even if you’re not usually a baker, this cake is something you can do.  It’s very easy to cover the cake in fondant “stones” by just flattening small balls of fondant and pressing them directly into the buttercream.  Rapunzel’s tower was a soda can.  (Obviously, I emptied it first, or the lopsided cake would have fallen over for sure.)

The party was fun for my daughter and her friends, but like the cake, it was not without its imperfections.  We did none of the Rapunzel things we’d planned because all my daughter wanted to do was take her friends to play on her “playground” where one of them walked in front of a swing.  Let me just say I almost died when I saw that child do a complete flip and land on her face…She was fine in just a few minutes, but I’ll never quite recover.  Her mother probably won’t either, and it won’t surprise me if they RSVP “No” the next time I send an invite.

So, after building all the hype with a Tangled birthday party, I was a little concerned that we might not actually like the movie…No need to worry.  Disney’s 50th animated film is one of its best.  It was funny and sweet and beautifully made.  I loved it as much as my daughter did…and she just laughed out loud again and again.

For me the funniest part was the frying pan.  Oh my.  Hysterical.

The wicked woman was frightening, both for small children and for moms like me….I hate to admit it, but when started singing “Mother Knows Best” I started cringing because, all too often, I sound too much like her, worrying over my children to the point I make them fearful….not so I can keep them locked in a tower, mind you….

If you haven’t had a chance to see it…go!  It will give you a whole new appreciation for your frying pan.