You are here: Home / Faith / No Matter What They Call You, There’s Just One Name You Need

Has it really been four months since I last posted here?  Good grief.  I do apologize for the absence.  In the mean time, my blog had a bit of an identity crisis (much like its author, I guess) so I have done a little redesign and figure that if the kids can get back to school I can get back to blogging.

We’re busy.  I’m busy.  Everyone’s busy, and to be honest, it’s easy to be overwhelmed trying to balance all the hats I have to wear.  You, too?  If so, this post (which I wrote the first week of June by the way) might just be what you need to hear today.  No matter what hat you’re wearing or what role you’re playing, you’ll find there’s only one name you need. 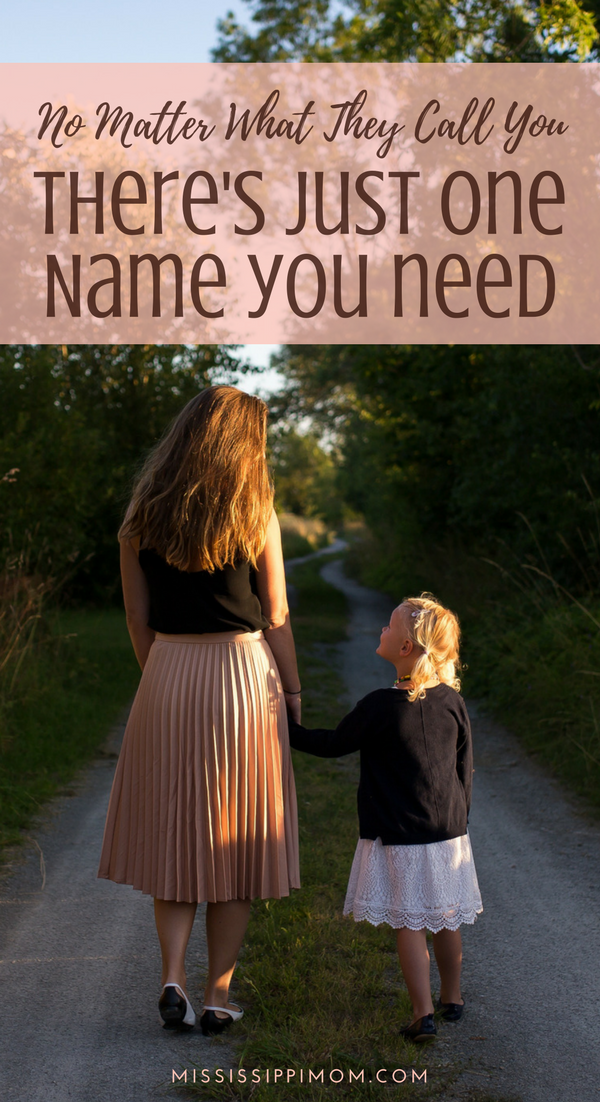 My name is Charlie.  It always has been.  My parents didn’t call me Charlotte or Charlene or any other female version of a name that could be shortened to Charlie.  Just Charlie.  No matter how many people have asked me over the years, I’ve always answered:  “No, just Charlie.  That’s my name.”

But the truth is that I never wanted it to be.

I hated the fact that people thought it was a boy’s name and that no one ever knew how to spell it (Charley?  Always -ey?  EEEE – WHY????).  Do you know how many nicknames five-year-olds can come up with for Charlie?  Hmmm….

It annoyed me to no end.

One of our family’s good friends always called me by my middle name, and I loved him for it.

Still, after almost 40 years, I’ve come to realize something.

But it’s not what I’ve always been called.  I’ve been given other names.  I’ve given myself other names.  And, not always nice ones.

Because we do that, don’t we?

We name things.  We categorize them.  It’s part of who we are as humans.

Think of Genesis 2:19, which says, “He (the Lord) brought them (the animals) to the man to see what he would call them.”

Because he knew that Adam would.

I wonder if this innate need to name things is just one of the ways we are made in God’s image.  After all, He named light and darkness, day and night.  He pronounced “good” over all he had created.

Because names are important.

A name signifies your role, your responsibility and your relationship.

A new role with new responsibilities.  A new relationship.

A couple of years later, I began to be called…

And with those names, I gained so many more:

I often hear my name before I even open my eyes in the morning.  Sometimes, it seems it’s all I hear.

“Mom!  I’m scared.”   Don’t worry, Comfort and Protection are on their way.

Sometimes, especially as a homeschooling mom, I feel a little like I live on an isolated island, and the one person on the island who is responsible for the day to day survival of everyone else is me.

I have to feed them.

I have to clothe them.  And, y’all, that means I have to do their laundry, too.

I have to teach them.  Whether my kids keep up, if they do well, if they get into college, if they get scholarships….  It’s all on me.

That’s how I feel.

But, even together, we get overwhelmed with it.

Sometimes, I feel like God was speaking directly to me when He said:

“Give careful thought to your ways.  You have planted much but harvested little.” (Haggai 1:5)

Do you know that feeling?

It’s the mode in which I often operate.

And I hate it.

Because inevitably, I always end up feeling like everything is spinning out of control, and it’s all going to come crashing down.  So, I start focusing on the managing and forget all about the meaning.

Because these are my kids we’re talking about.

What do you do?

We run to the only name we need.

Proverbs 18:10 says, “The name of the Lord is a strong tower.  The righteous run to it and are safe.”

We run to the name of the Lord.  It is a fortified tower for us.  It’s our place of hiding, our secure situation.

So, if we’re going to run to his name, we’d better know it.

What is His name?

We’re not the first to ask.

Before he took a step toward Canaan, Moses asked.  He needed to know who was sending him, and so do we.

Psalm 9:18 says, “Those who know your name trust in you for you have never forsaken those who fear you.”

So, what’s his name?

He is “God Most High.” He is sovereign.  Over this world, and over us.

What do you do with “God Most High”?  You bow before him and come to know him as “Adonai.”  The Lord.  We run to the name of the Lord, our strong tower, and bow before him because with submission comes everything we need for the tasks before us.

When we know him as “Adonai,” we can trust him as “El Shaddai.”  God Almighty, the All-Sufficient One.  Y’all, this name evokes the image of a nursing mother, pouring life into her little one.

He pours life into us, supplying all we need.  2 Peter 1:3 says, “His divine power has given us everything we need for life and godliness through our knowledge of him who called us.”

He’s given us everything we need.

Because he is Jehovah-Jireh, the Lord who provides.

He provided a sacrifice for Abraham.

He provided one for us, too.

Because he is the Lord Who Sanctifies You.

His sacrifice on the cross, set us apart, made us holy, made us clean.

Because he is Jehovah-Rapha, the Lord who Heals.

He gives us peace.

Because he is Jehovah-Shalom, the Lord our Peace.

Jesus made peace for us.  He still does.

In our family – in our homeschool – there is often strife, a bit of struggling.  I’ve found that apologies often smooth things over.  He settles them.

When I realize that it’s Him I’ve failed (and not just my family) and when my kids do, too, things change.

We give more than hurried hugs and mumbled apologies, we give grace because we’re humbled.

And, that’s okay because he is “The Lord Our Righteousness.”

In him, we become the righteousness of God.

There can be a lot of isolation in the life of a homeschooling parent (or any parent, that is).

Sometimes I feel like the only adult conversation I get is in the drive-thru line at McDonald’s.

But I am not alone.

Because he is Jehovah Shammah – The Lord is There.

He is with you.

When you feel no one notices all you do and the effort you make, remember he is also “the God who Sees.”

Remember Hagar?  She was done.   Mistreated, scared and over it.

He saw her.  Right where she was.

And, He led her to still water and restored her soul.

Because he is Jehovah-Raah, the Lord my Shepherd.

He guides you along paths of righteousness for his name’s sake.

His name is his reputation, and it’s at stake.  He cannot fail.  He will not fail.

And as you do this thing, this battle that is parenting, where the goal is not just mastering math facts, but raising godly children in an ungodly world, remember:

He is the “Lord of Hosts.”  He’s our stronghold.

And, he is in the battle with us because He is Jehovah-Nissi, The Lord Our Banner.

He goes before us.

He makes the way.

Psalm 139 says he hems us in, behind and before.

So we need not fear.

One of my dear friends once dreamed that she and I were guiding our children through a dark and stormy forest.  She told me how terrifying it had been and how  she was convinced that the dream is a reality.

She is right.  We ARE guiding them through a dark and scary place, day by day.  There is a battle going on all around us, but remember this:

The Lord of Hosts is already victorious.

Zechariah 14:9 says that when the new Jerusalem comes, “The Lord will be king over the whole earth.  On that day, there will be one Lord and his name the only name.”

Because it is true today.

So, lift his name high.

And, in your homeschool.