You are here: Home / Family Fun / Bring the Past to Life with Traditional Thanksgiving Dinner Recipes from Colonial America

One of my favorite things to do with my kids is explore recipes from other cultures.  With Thanksgiving coming, I thought it might be interesting to explore recipes from another time.  We’ve been studying the Pilgrims and the early settlements in New England so now would be a great time to look a little more closely at what the Pilgrims may have eaten at the first Thanksgiving. 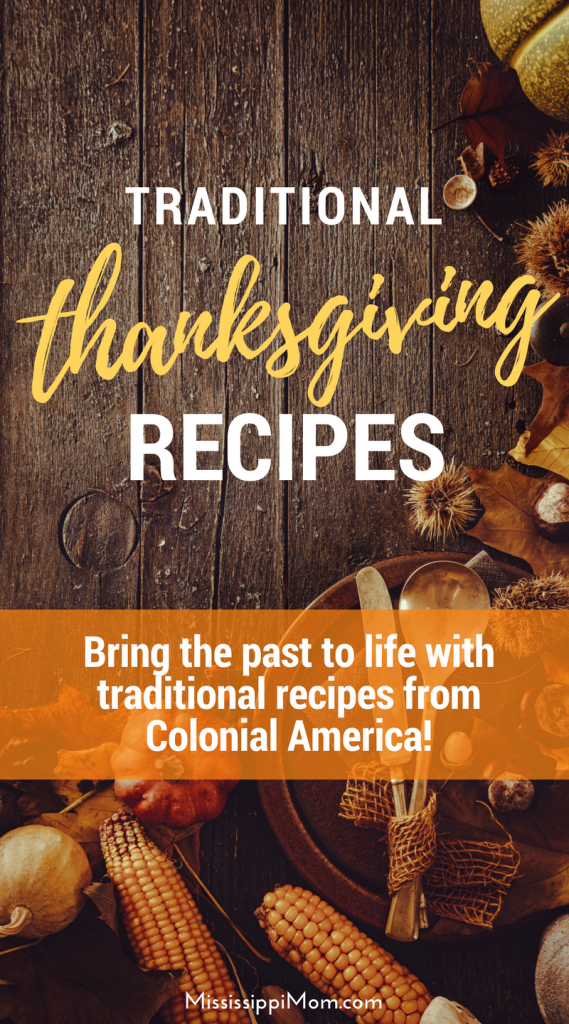 Like many Americans, my family’s history is varied.  Some of my ancestors were here to help the United States gain its independence; others found their way here early in the last century.  I’m sure there were others who came to America at many different points in between.

Our family gatherings reflect the diversity in our past.  Lebanese dishes are served side by side with turkey and dressing.  (My ancestors settled here in the South so it’s dressing, never stuffing, and we usually serve sweet potato pie over pumpkin.)

Even our traditional Lebanese dishes have been somewhat Americanized.  Sometimes, there’s Wish Bone dressing in the tabouli.

Because food changes with culture, doesn’t it?

That’s why I think it’s really interesting to take a look at the foods our founding fathers would have enjoyed at Thanksgiving.

In the next few weeks, we will be trying a few of them, and I thought you might like to as well.

So here are some links that you can use for traditional Thanksgiving recipes.  Even if you don’t cook them, your family can enjoy this glimpse into our culinary past.

I know we will!

Traditional Thanksgiving Recipes from Around the Web

Other Resources for Studying Colonial America & the First Thanksgiving

For more information about the first Thanksgiving or resources for studying the New England colonies, check out:

Have you ever visited Plimoth Plantation, Historic Jamestown, Colonial Williamsburg or other similar sites?  Do you incorporate traditional recipes into your Thanksgiving dinner?  Does your family, like mine, enjoy traditional American dishes alongside recipes from other cultures?

I’d love to hear more about what’s on your menu this Thanksgiving!

P.S.  I totally missed posting yesterday for no other reason than that I was too tired to get it done!  I am sorry and hope to double up one day so that there will be 30 posts in the series 30 Days of Thanksgiving, but sometimes you just have to sleep!